The Royal Swedish Academy of Sciences has announced the 2021 Nobel Prize winners in Physics. Syukuro Manabe and Klaus Hasselmann are awarded the Nobel Prize for their pioneering work on developing climate models. Giorgio Parisi is rewarded for his theoretical solutions to a vast array of problems in the theory of complex systems.

Syukuro Manabe demonstrated how increased concentrations of CO2 in the atmosphere lead to increased temperatures at the surface of the Earth. In the 1960s, he led the development of physical models of the Earth’s climate and was the first person to explore the interaction between radiation balance and the vertical transport of air masses. His work laid the foundation for the development of climate models.

About 10 years later, Klaus Hasselmann created a model that links together weather and climate. He also developed methods for identifying specific signals, fingerprints, that both natural phenomena and human activities imprint in the climate. His methods have been used to prove that the increased temperature in the atmosphere is due to human emissions of CO2

Around 1980, Giorgio Parisi discovered hidden patterns in disordered complex materials. His discoveries are among the most important contributions to the theory of complex systems. They make it possible to understand and describe many different and apparently entirely random complex materials and phenomena. 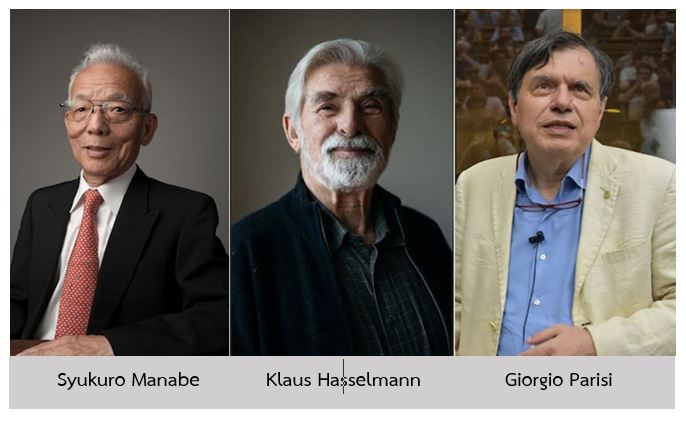