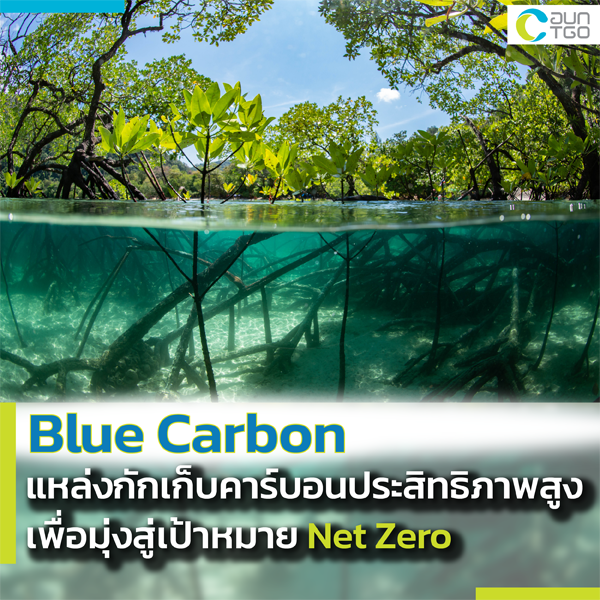 world leaders earlier pledged to end deforestation by 2030 at COP26. However, only 43 out of 113 countries have included blue carbon ecosystems as part of their mitigation measures which causes campaigners and marine conservationists therefore mention that the powerful carbon sinks in the ocean are being overlooked.

Wetland ecosystems including mangrove, salt marsh and seagrass, which are considered as blue carbon, are powerful carbon sinks. The ecosystems store most of the carbon in their soil and sediment and the carbon stays there for millennia if the ecosystems are not disturbed. While “green carbon” rainforests store carbon in biomass and then release it when the trees die. As a result, blue carbon can store up to 10 times more carbon than forests.

More supportive evidences of the potential blue carbon have obviously emerged. It was found that Steart marshes in England absorbed 19 tonnes of carbon a hectare every year or 18,000 tonnes in four years which is equivalent to the elimination of greenhouse gas emitted by 32,900 cars. Suggesting that blue carbon is an order of magnitude more efficient than its terrestrial equivalent. In addition, carbon absorption by seagrass, as part of photosynthesis and traps it in the mud, is 35 times faster than the rainforest.

However, wetland ecosystems are ones of the most threatened in the world because of coastal development, farming, harmful fishing practices and pollution. Approximately, 50% of mangroves have been lost from the Caribbean coast over the past three decades, due to cattle ranching, roads and tourism. 92% of seagrass in the UK has been lost in the past two centuries, with 39% disappearing just since the 1980s. Seagrass covering around 0.1% of the ocean globally but providing 18% of its carbon storage, is reducing by 7% each year. For Thailand, there are approximately 2,500 square kilometers and slightly increase by last year; however, it might not sufficient to reach the greenhouse gas mitigation target of the country.

Not only being the powerful carbon sinks, wetland ecosystems are well known as nurseries for aquatic animals and protect coastal areas from storm surges. Therefore, it’s time to count blue carbon. Protecting and restoring strategies for blue carbon ecosystems are immediately required in order to reach a global target of net zero greenhouse gas emission.